The Evolution of Goalie Gear

Looking at a goalie today, you’ll see state-of-the-art technologically advanced gear from head to toe, as a way to help protect from injury. But if you look back at the game many years ago, you’d see something far different. In fact, you’d actually see more of the actual goalie, because the gear they wore was pretty sparse and minimal.

One of the biggest differences you’d see is that back in the late 1950’s, goalies did not even wear masks. Today that is unheard of (and illegal), but back then it wasn’t part of the uniform and players didn’t see the need for it. According to a Chicago Tribune article on the evolution of goalie gear, the last goalie to play without a facemask in the NHL was Pittsburgh’s Andy Brown (1974).

According to the article, “The slap shot had not yet come into vogue, and shooters used wooden sticks that weren’t curved like modern sticks, so pucks fired at goalies would typically lack lift and speed. Masks were also considered unmanly.”

Aside from facemasks, goalie gear back in the day was pretty much one-size-fits-all, which seems crazy when you think about the size difference of players. Nothing was custom and it often fit baggy, which meant that it wasn’t always doing its job of projecting the goalie. A lot of hockey equipment and uniforms were not waterproof so players were weighted down by excess sweat and melted ice, which dramatically changed what they were able to do on the ice (i.e. how quickly they could move).

There has also been a drastic change in leg pads worn by goalies over the years. In the 1937-38 season, the NHL mandated a rule that leg pads worn by goaltenders could be no wider than 10 inches (Which then went to 12 inches then back to 11 inches throughout the years). Fast-forward to the 2010-11 season, and the Chicago Tribune explains – “The maximum length for leg guards, which previously was 38 inches, is replaced by a new rule that is customized to each player — each goaltender should wear pads that are anatomically proportional and size-specific based on a player’s individual physical characteristics. The NHL’s Hockey Operations Department has total discretion to determine the maximum height for goaltenders’ pads based on the measurements they take.” 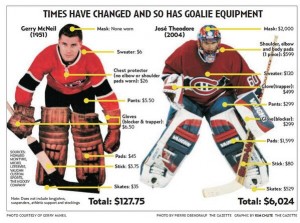 If you’re looking to step up your goalie gear or update your goalie stick or have other hockey needs, be sure to check out Hockey World today and don’t forget about our Best Price Guarantee.