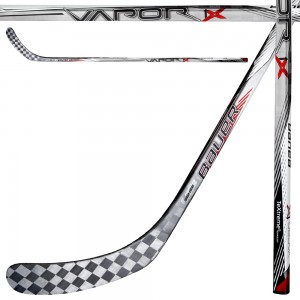 The hockey stick we’ve all been waiting for is finally here.

The brand new technologically advanced Bauer Vapor 1X has finally launched (February 13th) in stores and online at Hockey World for $269.99. This hockey stick is like no other. In fact, Bauer says this is the ideal stick for the crafty player who excels in puck handling and quick-release shots.

The biggest change we’ve seen on the Bauer Vapor 1X is their new Quick Release Taper (QRT) Technology, which helps optimize the load and recoil in the lower portion of the stick allowing the player to get off a much quicker shot. And we all know that quick (and accurate) shots win games of course.

Patrick Kane of the Chicago Blackhawks was one of the first in the NHL to start using this powerful new stick, helping perfect his slap shot. Now you can have access to the same stick. Who knows, maybe you’ll become as good as Kane and end up in the NHL? Of course we can’t promise that, but we can promise we have the Bauer Vapor 1X at the lowest price in the market.

This new hockey stick has been dubbed a game changer, and now it’s finally available at Hockey World.

If you’ve tried the Bauer Vapor 1X or heard feedback, leave us a comment below on your thoughts on their new technology and how it’s advancing the game of hockey to see if it’s the right stick for you.

Kevin is our Chief Operating Officer. He has worked at Perani's for 8 years in Purchasing, ECommerce, and on the Management Team. Kevin is also the President of the Kris Perani Hockey Foundation where he reviews applications submitted for financial assistance. Follow him on Google